Beautiful, mysterious, strong, and with a language of their own; Hyderabad has been home to spectacular rock structures as has been the Deccan plateau. ‘Bahaar-e-Hajar’ or ‘Garden of Rocks’, the soon to launch maiden visual project of the art initiative ‘Vantena’ pays tribute to the natural rock formations of Hyderabad and Deccan region that have long since been the identity of a unique city, but are unfortunately fast disappearing.

Classical dancer, and founder and Artistic Director of ‘Feet on Earth’, and a writer Pujita Krishna in association with Hyderabad-based photographer/cinematographer, and founder of ‘Pseudography’ that deals with storytelling through photography joined hands to create the bridge of art – Vantena. It brings together various aspects of nature and art – music, dance, literature, and anything else that lends itself to elegant and emotive expression. The concept has been thoroughly explored in the debut episode on the rockscapes of Hyderabad, which both Pujita and Sudarshan have grown up watching, and have seen them vanishing too. “The rocks of the Deccan region are believed to be some of the oldest rocks in the world. We made this piece as an ode and it is not preachy but subtly and poignantly hints at the loss of our geological heritage through music and gesture,” she shares.

Bahaar-e-Hajar brings together select verses from Kalidasa’s beatific ‘Ritusamhara’ and the haunting Flower Duet from Delibes’ famous opera, ‘Lakme’. The classic French opera goes back in time, composed by Leo Delibes; it was premiered on 14th April 1883. The story follows the ill-fated fictional love between Lakme (French version of the name ‘Lakshmi’) and Gerald, a British officer. The flower duet is a celebration of flowers as are the lines that were chosen from the ‘Ritusamhara’. This reference to flowers is a cryptic cry aimed at the ‘flowers’ of stones that are being plundered in the name of development.

The recitation of the lines in Sanskrit is done by Pujita Krishna and the creative visualization of the visuals by Sudarshan Vig. Bahaar-e-Hajar also brings in the beauty of Indian textiles with the use of some really elegant, indigenously designed, and draped fabrics by textile designer Sourav Das. The video will soo be available to watch on YouTube. The rocks of the Deccan region are believed to be some of the oldest rocks in the world. We made this piece as an ode and it is not preachy but subtly and poignantly hints at the loss of our geological heritage through music and gesture – Pujita Krishna

Pujita Krishna represents the young brigade that goes beyond ‘Art for Art’s Sake’. A Kuchipudi dancer trained by Guru Dr. Vedantam Ramalinga Sastry, she also represents the next-gen of Vilasini Natyam, which she learned under the tutelage of Gurus Dr. Swapna Sundari and Dr. Anupama Kailash. Sudarshan Vig is an avid art evangelist. He is also part of other initiatives like “Chota Bioscope” (an initiative for children and young adults to appreciate world cinema) and “Art for Causes” (teaching photography to children from underprivileged backgrounds). The duo plans to work on various themes for project Vantena.

Pujita explains, “We wish to create visual pieces that will entail dance, gesture, and emotion-based expression, perhaps some storytelling, and even champion what may appear to be lost causes. The thrust of the project, however, is to bring about unexpected and unusual conjunctions of artistic and creative expression.”

The Feet That Celebrate ‘Apah’ – Water 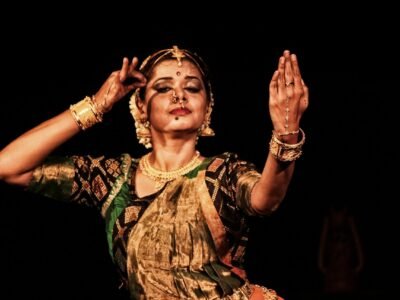 Feet of Earth – The Dance Festival Hyderabad – a Novel Set in History of Liberation Celebrating 75 Years with One World Fusion
About Post Author