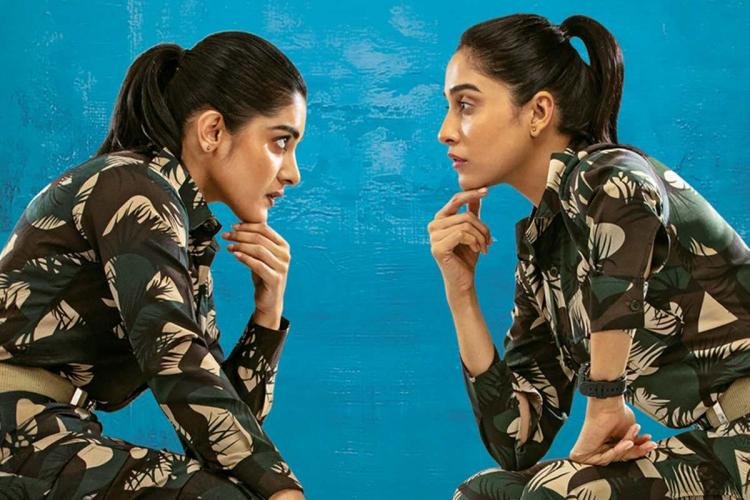 Two police trainees at logger heads with each other, eventually become friends, and how they come across a crime forms rest of the story of Saakini Daakini, a Suresh Productions, Guru Films collaboration. The title is is taken from the common reference to demons, and the film is the remake of a Korean hit Film ‘Midnight Runners’ by Kross Pictures. The film is directed by Sudheer Varma. The original film has two heroes and it’s their bromance that had worked for the film. The major change by having two women has a risk of going the clichéd way. But carefully planned screenplay adapting it to the Telugu audience with a some comic relief thrown in, characterisation of the two lead actors that fit the bill perfectly and above all action sequences choreographed meticulously make Saakini Daakini a delightful watch.

If there was a doubt whether the two women will have the presence enough to bring audience to the theatres in these difficult times, brilliant performances of Nivetha Thomas and Regina Cassandra from the first scene itself set the tone for the rest of the film. Nivetha as Shalini who loves her food, joins the police academy on a whim with no clear direction on what she wants in life, and a good heart that she wears on her sleeve strikes a chord with the audience. Regina as Damini is a reluctant joinee. Her goals are different and the police academy doesn’t fit into her bill. Her aim is to go to the US and agrees to the training only to keep her parents happy for the next few months before she is on her flight.

They are room mates troubling each other and fighting but reconcile and become Inseparable eventually. This revelation of the plot will not effect your experience. The characters are relatable, situations are engaging and seamlessly move forward to the crime scene.

Like in ‘Morning Runners’ here too Shalini and Damini chance upon the heinous crime of embryo hatching endangering the lives of several young girls. And, as suneetha Taati the Producer mentioned in many of her interviews it is definitely empowering to watch two women police trainees fight for other women and solve the crime.

The two characters have their own vulnerabilities but when it comes to fighting the wrong doers they are all powerful and pack in a punch.

The entire team will have to be cheered for their contribution to making this film good, production wise as well. The two directors were well aided by fight master and the music director Mikey McCleary – adding to it is some great editing there, for it to be packed into the two hour span.

If you have to nitpick then one could point towards the comedians – their scenes could have been written better surely. That is said not to take away from what is already working in terms of the comedy track. To cut it short,  If you like action crime thrillers here’s one for you – Saakini Daakini