Liger Review: Vijay’s Roar Fails to Save the Film

Way back during his hey days Puri Jagannath made a film ‘Amma Nanna O Telugammayi’ – a blockbuster with Ravi Teja and Asin in the lead -the hero is a boxing champion. Fast forward to 2022, he had a heartthrob of masses Vijay Devarakonda in the lead, Dharma Production and Karan Johar backing him up and amplifying the marketing, he had the best of action masters by his side, good technical team- and last but surely the best – a Pan India audience waiting to lap up the film. The readymade audience, who have been carrying the high expectations for the film, further fuelled by non-stop promotions across India. And all he manages is a poor imitation of his film from 2003. And boy! Does he disappoint and how. ‘Liger’ film starring Vijay, Ananya Pandey, Ramya Krishna, Ronit Roy, Chunky Pandey and gang, starts on a high note with camera work giving it an international feel as Vijay is running across the streets of Vegas and we understand – he is out to protect Ananya Pandey being kidnapped. And Liger Vijay Devarakonda sets out to tell his story that begins with setting up a tea stall with his mother in Mumbai, when Makarand Deshpande attempts to threaten the mother-son duo. Before they can react, Ali comes running to them asking to be saved from evidently a dangerous gang, and Vijay uses his martial arts skill to beat up the gang members. This serves two purposes – Makarand is tamed, and Ali considers him his saviour and turns up towards the second half of the film to take the forward by helping Liger and team to go to the US.

Liger is the story of an MMA – Mixed Martial Arts – fighter, whose father dies while fighting. His mother dreams of making his son a champion and comes to Mumbai to seek training from Ronit Roy. After a few reels Vijay does get accepted into the training but with fair warming to avoid girls and stay focused. However, Ananya Pandey serves her purpose in the film, and manages to distract the hero – but just after a couple of songs rejects him because she realizes he has a stammering problem. How does Liger get back to his purpose in life. How does he reach his goal? How does he become a national champion and reach the US and why he is running on the streets is revealed during the good part of second half. The film is peppered with well-choreographed fighting scenes, and songs, Vijay at his best, setting the scenes on fire – with his well-toned body and passionate acting. However, the connecting thread is loosely knit – the predictable scenes, the lack of emotional connect be it during the romantic scenes or while establishing the mother-son equation is glaringly evident. Puri Jagan revels in taking risks and by having his protagonist stammer he broke a whole lot of stereotypes. However, by reducing the disability to a mere joke, he beats the purpose. The crassness in presentation is also evident in bits and parts. The Award for the Most Cringe Worthy scene goes to the Krav Maga fight scene. And to imagine the whole of India is listening to Vijay speak such deplorable dialogues makes it worse.

While the scene with Mike Tyson as a standalone one is entertaining. In the larger scheme of the film – it fails to be the ideal climax. 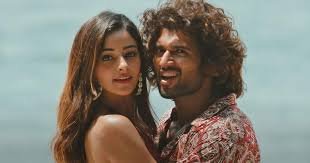 The film leaves the audience, especially Vijay and Puri Jagan fans feeling cheated. It is such a huge missed opportunity. This is the story of an underdog fighter, making his way into the world of MMA, getting trained, working hard to realise his parents dream, and on the sidelines is his love of the girl, whose rejection fuels him to achieve his dream. However, you feel neither empathy, nor joy as the hero goes about his job – without much of an effort. You come out of the theatre feeling something amiss. Ramya Krishna’s over the top acting overshadowed by ‘Shivagami’ adds to the lack of show. Lack of chemistry between the lead pair is a major minus.

‘Liger’ has all the glitz minus soul. It has all the action minus the Puri touch. Will recommend a watch for all the effort though.